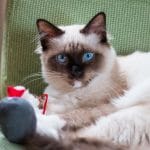 The Birman is similar to the Siamese of Thailand, but he has a stockier body, white feet, and a long, silken coat that comes in all pointed colors, including chocolate and lilac. He’s considered a medium- to large-sized cat, weighing between seven and 12 pounds.

The Birman is a calm, affectionate feline who enjoys spending time with his family — especially if you lavish lots of attention on this former temple idol. Birmans get along well with children and other pets. If you talk to him, your Birman will respond in a soft, pretty voice, but he’s not as vocal as the Thai Siamese. Although Birmans are less active than some breeds, they have a serious playful side. It’s not unusual for them to fetch or chase a ball — when they’re not curled up in your lap.

The breed was first imported to the United States in the 1960s.

Birmans should have four white feet, with a pattern described as “gloves and laces.”

The Birman has a distinctive roman nose.

These are intelligent cats who thrive on interactive play, such as puzzle toys.

Birmans consistently make the top-ten lists in the U.S.