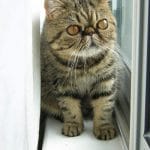 The lazy man’s Persian, as he is sometimes nicknamed, is as squeezably soft as a package of Charmin. He has the sweet, gentle face of the Persian, as well as the same body type, but is somewhat livelier, a nod to his American Shorthair heritage. He will play endlessly with a fishing pole toy and plot how to get access to it when you have put it away. For the most part, though, he loves to be a lap cat and has an easygoing and undemanding personality. The Exotic communicates with his expressive eyes and his soft, melodious voice. He is adaptable and will enjoy living with any family as long as they love him.

The Exotic was originally intended to be a silver cat and was going to be called the Sterling, but today he is found in all the same colors and patterns as the Persian: solid, silver and golden, shaded and smoke, tabby, particolor, bicolor and Himalayan. His short coat is easily cared for with a weekly brushing.