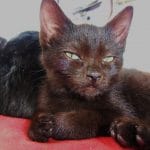 The Havana Brown’s fur resembles the wrapping of a fine Cuban cigar — or so the story goes about how the cat got his name. A number of cat breeds have been created by crossing the Siamese with other breeds to bring in desired traits, such as new colors, patterns, or hair lengths. The Havana Brown is one such hybrid.

A group of British breeders in the 1950s crossed chocolate- and seal-point Siamese with black domestic shorthairs and Russian Blues to create the striking chocolate-brown cats with emerald eyes. In at least one American cat registry, The International Cat Association, the cats also come in lilac and are known simply as Havanas.

The smooth coat of the chocolate-colored cats is a rich mahogany shade. Lilac Havanas are described as a sort of pinkish-gray color. Each color has matching whiskers. The cats weigh 6 to 10 pounds.

The Havana Brown uses his paws to investigate as well as to demand his person’s attention. Interactive toys are his favorites — anything that ensures your focus is on him.

The silky coat of the Havana Brown does not shed much and is easy to groom with weekly brushing. The only other grooming required is regular nail trimming and ear cleaning.

The Havana Brown is not as talkative as the Siamese, but he is sociable and likes to converse with his family in his soft voice. He gets along with children and is well suited to any home with people who will love him and give him the attention and play he desires. Keep him indoors to protect him from cars, diseases spread by other cats, and attacks from other animals.