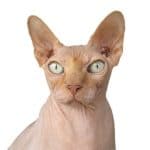 It’s one thing for a cat to have folded ears or a curly coat, but whoever heard of a hairless cat? It’s unnatural!

It’s not, really. The down-covered Sphynx is the product of a spontaneous natural mutation, a not-uncommon occurrence in the world of cats. The first known hairless cat made his appearance at least a century ago and certainly there may have been others throughout history. The cat we now know as the Sphynx began to be developed in the 1970s through crosses of hairless cats with Rex cats.

Instead of fur, the Sphynx wears a suede-like coat that makes him warm and soft to the touch. It’s impossible not to want to cuddle up with him, especially in cold weather. He is a medium-size cat with a wrinkled face and body and satellite-dish ears. He weighs six to 12 pounds, with females being smaller, and comes in almost any color or pattern, including solid, pointed, tabby and tortoiseshell.

The Sphynx’s uses his toes like fingers to investigate anything that catches his interest. His wrinkled face, big ears and lemon-shaped eyes give him the expression of a wise and kind alien, and his rounded belly makes him look as if he has recently eaten a large meal.

Don’t choose the Sphynx solely for his alien looks. You’ll be getting a lot more: a character who is curious, smart and funny. He loves to be with or on his people, perhaps in an attempt to stay warm. It’s not unusual for him to sleep under the bedcovers, and he is always seeking out sunny spots in which to lie or other places or objects that give off heat. The Sphynx is a clown who will do anything for attention, so be prepared to applaud his antics.

You may hear that the Sphynx is hypoallergenic because of his lack of fur, but that is not correct. Allergies are not caused by a particular coat type but by dander, the dead skin cells that are shed by all cats (and people, for that matter). There is no scientific evidence that any breed or cross breed is more or less allergenic than any other cat. Some people with allergies react less severely to particular cats, but no reputable breeder will guarantee that her cats are hypoallergenic.

The Sphynx is well suited to any home with people who will love him and give him the attention and grooming he needs. Keep him indoors to protect him from cars, diseases spread by other cats and attacks from other animals.

The Sphynx’s skin is covered with a fine down, much like that of a peach.

The Sphynx has large ears that can be two or three inches high.

The friendly Sphynx is easy to handle and enjoys meeting new people. He can be an excellent show cat and therapy cat as well as family companion.

The Sphynx is sturdy, medium-boned, athletic and muscular.

Because the Sphynx does not have fur to absorb body oil, he must be bathed frequently.