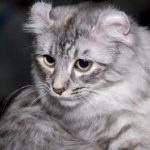 The American Curl is the product of a spontaneous natural mutation, a not uncommon occurrence in the world of cats. But his name doesn’t refer to his coat, which can be shorthaired or longhaired. Instead, it’s a shoutout to his backward-curling ears, adorned with long tufts of fur, which give him the appearance of being surprised by joy.

The first known Curl cat made his appearance in the early 1980s. Cat breeders eventually took an interest in this twist of nature, and he was developed into a breed.

True to his expression, the American Curl is a joyous cat. This medium-size cat loves to play, even well into old age, and it’s not unusual for him to enjoy playing fetch. Like any cat, he is most often found perching in high places; that is, when he’s not perched on your lap or following you around.

He is sociable, loving, and family-oriented, often with a special fondness for children. He is a good choice for families with older children who will treat him respectfully, but toddlers should be supervised so they don’t manhandle him. The Curl is also perfectly capable of getting along with other cats or with cat-friendly dogs in the household.

Because he is so friendly, the Curl doesn’t like being left alone for long periods, so consider your schedule and the presence or absence of other pets before you bring one of these cats home. You don’t want him to develop separation anxiety.

The American Curl is well suited to any home with people who will love and care for him. Keep him indoors to protect him from cars, diseases spread by other cats, and attacks from other animals.