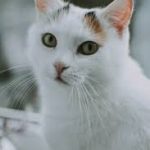 The Japanese Bobtail is surrounded by many legends and traditions. A tricolored cat with a beckoning paw and a bobbed tail is a symbol of good fortune in Japan, and the Bobtail has been depicted in art and described in writing in that country for at least 1,000 years.

His stump of a tail, which resembles a pom-pom, is the result of a natural genetic mutation. Other characteristics of the breed are a triangular head, high cheekbones, a long nose, oval eyes that may be blue or odd colored, and hind legs that are slightly longer than the front legs. The Japanese Bobtail is a small cat, weighing 5 to 10 pounds. He has a soft, silky coat that can be short or long and comes in a variety of colors and patterns, but the tricolor is most popular.

The Japanese Bobtail is active and intelligent. It’s not unusual to find him splashing his paw in water, carrying toys around, or playing fetch. He is highly curious and loves to explore his surroundings. Japanese Bobtails are talkative, communicating with a wide range of chirps and meows. Their voices are described as almost songlike. These are outgoing cats who get along well with children and other pets, including dogs, and adjust to travel with ease. They love people and are often seen riding on a shoulder so they can supervise everything going on.

The Japanese Bobtail coat is easy to groom with twice-weekly brushing or combing. You’ll need to brush him more often during the spring and fall shedding seasons. Trim the nails as needed.

The Japanese Bobtail is well suited to any home with people who will love him and give him the attention and play he desires. Keep him indoors to protect him from cars, diseases spread by other cats, and attacks from other animals.