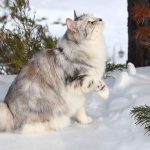 The Kurilian Bobtail’s looks are deceiving. At first glance, he may look compact, but when you pick him up, you discover that he’s a solid bundle of muscle. The cats may not reach their full size until they are 5 years old. The Kurilian is sometimes said to resemble a lynx, with his bobtail and long hind legs.

Those long hind legs make this cat a superb jumper, and he’s renowned for his hunting skills. If you live with a Kurilian, any rodents (or possibly small pets) in the area are at risk.

They are also known for enjoying playing in water, not surprising given their island heritage and water-resistant coat. The Kurilian can snag a salmon in his homeland, so guard your koi or other fish carefully from him. Not surprisingly, he can adapt to many different climates and environments, from country to city.

This is a highly active cat, but that doesn’t mean he won’t sit still for a little petting. He’s usually trusting and friendly, traits that may make him a good companion. He may, however, choose a single person to be his favorite, leaving other family members out in the cold.