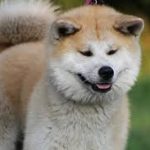 The world’s best-known Akita was a Japanese dog called Hachiko who is revered in Japan for his display of loyalty. After his owner died, Hachiko kept vigil for the rest of his life at the railway station where they always met at the end of the day.

Weighing 65 to 115 pounds (and sometimes more), the Akita is a large verging on giant breed. He has the typical spitz appearance: wedge-shaped head, prick ears, rectangular body with a dense double coat in any color or combination of colors and plumed tail curled over his back.

The Akita needs a 20- or 30-minute walk or run daily, always on leash. He performs well in dog sports such as agility, obedience and rally, but they aren’t his favorite activities. He prefers the more one-on-one experience of being a therapy dog.

A people-loving dog like the Akita needs to live in the house. It’s an unhappy Akita who is relegated to the backyard with little or no human companionship.

Akitas shed heavily in the spring and fall and smaller amounts year-round.

The Akita’s coat comes in many colors and patterns. It has little odor and sheds dirt easily.

Akitas have a strong prey drive and will go after animals that come into their territory, but they can learn to get along with cats if they are raised with them.

The Akita demands respect and can be a challenge to train.