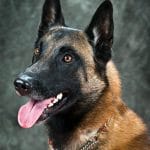 Intelligent and easily trained, the Belgian Malinois exudes confidence and is an exceptional watch and guard dog. Active and energetic, he’s terrific at search and rescue, agility, and pretty much anything else you can teach him.

Although his fawn-colored coat and black mask mean he’s often mistaken for a small German Shepherd, the Belgian Malinois (pronounced mal-in-wah) is a distinct breed. His native country, Belgium, is home to four herding breeds that vary by color and coat type. Named for the town of Malines where he originated, the Malinois is the short-haired variety. He is a medium-size dog with a protective personality and, among other things, has proven adept at police work.

The Malinois has high energy levels and needs much more activity than a simple walk around the block. Choose this breed only if you are a high-energy person who enjoys active daily exercises such as running, bicycling, and hiking. He’s well suited to just about any dog sport or activity you can teach, including agility, flyball, herding, obedience, rally, search and rescue, and tracking.

Begin socialization and training early to make the most of the Malinois’ intelligence, rapid learning ability, and drive. He is sensitive to harsh corrections. Be firm, fair, and consistent, using positive reinforcement techniques such as praise, play and food rewards.

Malinois temperament ranges from aloof to outgoing, but he should never be fearful, shy, or aggressive. He is an excellent watchdog and has the size and ability to be protective when neccessary.

The ideal Malinois has parents with good temperaments and has been socialized from an early age to be accepting of people when introduced. Those elements — combined with companion dog training — make for a discriminating dog that can make appropriate decisions when it comes to protection.

When the Malinois is raised with children, he can be very accepting. But don’t forget that he is a herding breed and may have the tendency to chase or nip at children. This should never be permitted! He is best suited to a family with older children who understand how to treat him with respect.

The Malinois may or may not get along with cats. He has a strong prey drive and may chase cats or other small furry animals. That said, some Malinois do get along well with indoor cats if they have been raised together.

The Malinois can be aggressive with dogs or other animals he doesn’t know. If your home has a yard, it should be securely fenced to prevent the dog from leaving the premises as well as to keep other dogs from coming onto the property. That doesn’t mean an underground electronic fence! If the Belgian Malinois wants to leave the yard, a shock isn’t going to stop him, and this type of fence doesn’t prevent other dogs from coming onto your property, either.

Brush the Belgian Malinois’ coat weekly to remove dead hair. He does shed and will need more frequent brushing during that time to control the amount of loose hair floating around. Trim his nails as needed, and keep his ears clean and dry to prevent infections. Strong dental hygiene is also important.

This is an indoor/outdoor dog. While the Belgian Malinois should certainly have access to a securely fenced yard, he should be with his family when they are home. He is best suited to an experienced dog owner.

The Malinois is one of four Belgian herding dogs that are all considered varieties of a single breed in their homeland.

The Malinois’ fawn to mahogany-colored coat is tipped with black, and he has a black mask and ears.

Because of his herding heritage, the Malinois tends to move in big circles