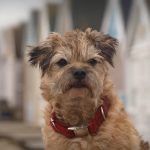 The people-oriented Border Terrier is more laid-back than other terrier breeds. His size makes him portable, and he’s a great companion and watchdog for a moderately active family. Bonus: The Border Terrier is also very trainable.

Although he’s not as flashy in appearance as some of his terrier relatives, the Border Terrier is still pure terrier, living life with great gusto, whether out and about with people or digging a hole in a flowerbed. Frankly, it’s a bit surprising that he isn’t more popular, given that he’s one of the healthier purebred dogs, is less driven to hunt than most other terriers, and is fairly flexible about exercise. He’s robust, sturdy, and great with children, making him one of the top terrier contenders for a family pet.

The Border Terrier may be small — 15 pounds or less — but he’s neither tiny nor fragile. He’ll happily roughhouse with kids, and he’s athletic enough to keep up with anyone, which is why he’s one of the few terriers well represented at such canine competitions as agility. Border owners also compete with their dogs in obedience, agility, and the show ring.

If you want a stellar companion, give him the opportunity to get out and run, smell, walk, and play a couple times a day — preferably behind a fence or on a leash, because he’s definitely fast when it comes to chasing creatures like squirrels and neighborhood cats. The Border Terrier is a people dog who’s prone to make a lot of noise and a big mess if left to his own devices, so he needs to live indoors as a member of the family.

The Border Terrier is characterized by his rough coat, “otter”-shaped head, and an “at the alert” attitude.

As a breed, the Border Terrier has changed little over the years, aside from becoming more consistent in appearance.

Border Terriers have thick, loose skin, which protects them from adversary bites.