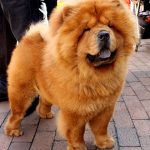 Independent and dignified, the Chow usually attaches himself to one person even though he will have affection for the whole family. When raised with children, he’s usually fine with them, although the kids may be disappointed that he’s not a hugger. An excellent guard dog and watch dog, he’ll protect against strangers.

The Chow Chow has several unique characteristics: a blue-black tongue, the coat of a teddy bear, the scowl of a lion, and a distinctive stilted gait. He is a Chinese breed, hailing from that country’s chilly northern region, and was developed as an all-purpose dog capable of hunting, herding, pulling a cart or other vehicle and guarding the home.

The Chow Chow has a low activity level and can live happily in any home, including an apartment or condo. One or two brief walks daily will satisfy his exercise needs.

All too often, Chow Chows have a reputation for being aggressive toward people, which is not acceptable. Early and frequent socialization is essential to helping them develop the confidence and discrimination they need to recognize what is a threat and what is normal. Buy a Chow Chow only from a breeder who raises puppies in the home and has exposed them to many different people, sounds and experiences before they go to their new homes. When he comes from such a background and continues to be socialized after going to his new home, a Chow can be a good family dog, ideally with older children who understand how to treat him with respect.

The Chow Chow is a medium-size dog. He has the typical spitz appearance: a deep muzzle and broad head set off by a ruff, small triangular ears, a smooth or rough double coat in red, black, blue, cinnamon and cream, and a bushy tail curled tightly over his back. Stay away from breeders who try to charge more for a Chow in any color other than red or who tries to sell you a Chow in fancy colors such as lilac, silver, chocolate, white and champagne. Chows come only in red, black, blue, cinnamon and cream. Any other color description is simply a creative marketing term. Nor is it true that colors other than red are rare. If a breeder isn’t honest about coat colors, it’s fair to wonder what else he or she isn’t honest about.

The Chow Chow needs to live in the house. It’s an unhappy Chow Chow who is relegated to the backyard with little or no human companionship.

A dog who looks like a Chow but has a tongue that is pink or mostly pink probably is not a Chow at all but a mix of one of the other spitz breeds, a large family of dogs that includes American Eskimos, Akitas, Norwegian Elkhounds, Pomeranians and many more.

The medium-size Chow is a powerful dog with a sturdy, squarely built body and a tail that curves over the back. He has a large head, accentuated by a ruff, and dark-brown, deep-set, almond-shaped eyes; small triangular ears that stand erect; a broad muzzle with a large black nose; and a black mouth and gums and a blue-black tongue. The overall effect is of a dog with a scowling, dignified, lordly, sober and snobbish expression, an accurate representation of the Chow’s temperament.

The Chow has a unique stilted gait caused by the straightness of his rear legs.