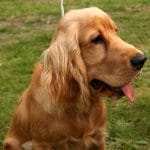 Larger than the American Cocker and with less coat, the English Cocker is devoted, affectionate, and funny. He learns quickly and is an ace at sports such as agility.

The English Cocker has since diverged further in appearance, leading to a split between dogs bred for the field and those bred for the show ring. Field-bred English Cockers have a shorter coat, a deeper chest and stand lower to the ground than conformation English Cockers. Both types have the potential to be fine companion dogs.

In the field, his job is to flush birds from heavy cover and then retrieve them. Even if you don’t hunt, he’ll still take every opportunity to flush any feathered game and do his best to go after it. Unless you’re in a traffic-free area, keep him on leash or you’ll lose him to the chase.

You may see some English Cockers described as “field bred.” That means they come from hunting lines and may be somewhat larger and more active, with a little less coat than English Cockers bred to be show dogs. There are some other minor differences in conformation (the way the dog looks) such as a shorter muzzle, ears that are set a little higher on the head, and the amount of tail that is docked.

A people-loving dog like the English Cocker needs to live in the house.

What’s in a name? In Britain, what Americans call the “English” Cocker is the Cocker, and the American dog is the American Cocker.

The term spaniel used to be applied to any dog that hunted and flushed game birds. They were usually differentiated by size or the way they worked.