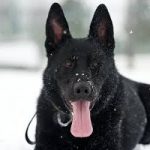 The “little black devil” is quite mischievous and wants to be in charge, and he will be in charge if you don’t take the lead. Highly energetic, he has brains, speed, and athletic ability that make him a great sports competitor. He’s also a terrific watchdog.

The Schipperke is often referred to as a little black devil. The small, black, prick-eared dog with the fox-like face and big smile looks like a member of the Spitz or Northern breeds of dogs, but he is thought to be a miniaturized version of a 19th-century Belgian sheepherding breed.

This sturdy little dog weighs 10 to 16 pounds. He has a distinctive outline and a double coat that forms a ruff around his neck and extends partway down his back, as if he’s wearing a cape. The Schipperke has many excellent qualities, but he’s not the right breed for everyone. Here’s what you need to know if you’re considering acquiring a Schipperke.

He’s not the right breed for you if you are someone who is easily trampled on by others. The Schipperke is a take-charge kind of dog. He is highly intelligent and has a mind of his own. You had better be smarter than he is if you don’t want him telling you what to do.

Mischievous and energetic, he is busy, busy, busy. Always on the alert, he is an excellent watchdog, but he can be a barker. You must teach him when it’s okay to bark and when to stop. The fun-loving Schipperke can be a good choice for families with older children who can handle him appropriately.

At a minimum, the Schipperke needs a 20 to 30-minute walk on leash, but you might be surprised to know that (health permitting) he can make a good jogging companion. If you’re really smart, though, you’ll take advantage of his brains, speed, and athletic ability and train him for dog sports such as agility, flyball, obedience, and rally. Those are all excellent ways to meet his needs for mental and physical stimulation. Expect him to dig holes or act in other destructive ways if you don’t.

Confine the Schipperke to a securely fenced yard. Besides being a digger, he is highly curious and will go off in search of an interesting scent without a second thought. He’s also fond of chasing small furry animals such as squirrels and will hunt moles, mice, rats, and other vermin with enthusiasm. Don’t count on an underground electronic fence to keep him contained. He’s much too interested in having his own way for that to be a deterrent.

Train the smart but independent Schipperke with firmness, patience, and consistency. Keep training sessions short and fun, and don’t be surprised if he puts his own spin on commands or outthinks you in other ways. For best results, use positive reinforcement techniques such as praise, play, and food rewards.

Although the Schipperke’s coat looks like a lot of work, it can be maintained with brushing once a week — more often when he’s shedding, which occurs once or twice a year. In addition, trim the nails as needed, brush the teeth, and keep the ears clean and dry.

The Schipperke should live indoors. He’s a companion dog and will loudly express his unhappiness if relegated to the backyard with little or no human companionship.

The Schipperke is a small black tailless dog with a foxy face. He has a square body and a distinctive coat, characterized by a ruff that stands out from the neck, a cape, jabot and culottes, all creating a dog with a unique silhouette. The ruff begins behind the ears and goes all the way around the neck. The cape is an additional layer beyond the ruff. The jabot (what might be called the apron in another breed) extends across the chest and down between the front legs. The hair on the rear thighs forms culottes (after the knee breeches formerly worn by men).

The Schipperke has a wedge-shaped head with prick ears and small oval dark-brown eyes. His expression is questioning, mischievous, impudent, and alert.

The Schipperke is what’s called a natural breed, meaning his coat should not be sculpted in any way. Only the whiskers and the hair between the pads of the feet may be trimmed for the show ring.

One of the earliest, maybe the first, dog shows was one for Schipperkes held in Brussels in 1690.

Legend has it that the Schipperke’s taillessness arose in the 17th century when a shoemaker became angry that his neighbor’s dog kept stealing from him and cut off the tail.