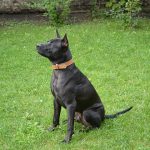 The Thai Ridgeback is a primitive breed that originated in Thailand and was first brought to the United States in 1994. The dogs were used in Thailand as watchdogs, to pull carts, and to hunt vermin such as rats and dangerous prey such as cobras and wild boar. Like most primitive breeds, they can be a handful and a half to live with.

Primitive dogs, sometimes known as pariah dogs, have distinctive physical traits, such as a moderate size, prick ears, wedge-shaped heads, wrinkled foreheads, squarish bodies with long legs, and smooth coats. The Thai Ridgeback is a classic example of one of these dogs. He comes in four colors — red, black, blue (gray), and yellow (fawn) — and he has pigmentation or spots on his tongue, similar to the Chow Chow and the Chinese Shar-Pei. Most (but not all) members of the breed have the signature ridge of hair running down their back with up to eight different ridge patterns.

He tends to be a smart dog and an independent thinker — two strikes for a first-time or inexperienced dog owner. He will push you to the edge to see what he can get away with, and if you let him win even once, you may never regain the upper hand.

That said, if you have great canine leadership qualities — firmness, consistency, and a great sense of humor — the tenacious Thai Ridgeback can be your best friend, not to mention a talented watchdog that has the added benefit of not being much of a barker unless his property or people appear to be in danger. He tends to be a one-person dog, but he can be protective of the entire family.

Early, frequent socialization is critical to help prevent a Thai Ridgeback from becoming overly suspicious or fearful of anything new or different. Purchase a Thai Ridgeback puppy from a breeder who raises the pups in the home and ensures that they are exposed to many different household sights and sounds, as well as people, before they go off to their new homes. Once your vet gives the go-ahead, continue socializing your Thai Ridgeback throughout his life by taking him to puppy kindergarten class, to visit with friends and neighbors, and on outings to local shops and businesses. This is the only way he can learn to be discriminating, recognizing what is normal and what is truly a threat.

Train the Thai Ridgeback with a firm hand and consistent direction. For best results, begin training early, keep training sessions short, and use positive reinforcement techniques, never force. If you can persuade the Thai Ridgeback that what you’re asking is something he’d really like to do — through games or treats, for instance — the better your chances of success.

The Thai Ridgeback can be a good playmate for older children, but a puppy can be too rambunctious for toddlers. Cats are likely to be viewed as prey, and he will probably be aggressive toward dogs he doesn’t know, though socialization can help.

A Thai Ridgeback needs plenty of companionship and activity to be happy. Bear in mind that he will need at least a good hour of strenuous exercise daily. Overall health permitting, a couple of long walks or runs should satisfy him. He is also eligible to compete in lure coursing competitions.

Always walk your Thai Ridgeback on a leash to ensure that he doesn’t chase or kill other animals. He is an escape artist and needs a securely fenced yard to keep him contained. He’s an excellent jumper and climber, so make sure the fence is high. An underground electronic fence will not keep the Thai Ridgeback contained, as he may not let a shock stop him if he sees something he wants to chase.

Better yet, keep him indoors, especially if the weather is rainy or cold. Because he’s from Southeast Asia, he’s not one to appreciate that type of climate.

Once he is house-trained and past puppyhood, the Thai Ridgeback is less likely to be destructive in the home. However, until he reaches maturity, take steps to protect your furniture, carpets, and other belongings from being gnawed, torn, or otherwise taken apart.

Thai Ridgebacks can adapt to living indoors or outdoors, but the most important thing to know about them is that they need human companionship. There’s no point in having a Thai Ridgeback if you’re just going to stick him out in the backyard all by his lonesome. If you do, you’ll come home to find the yard relandscaped to look like the surface of Mars. Keeping him indoors also lessens his opportunities to escape.

Some Thai Ridgebacks are born with a plush coat instead of a smooth coat. This is considered a flaw, and the dogs are spayed or neutered and sold as pets.

The Thai Ridgeback’s tail tapers to a point. He carries it up or curved like a sickle.