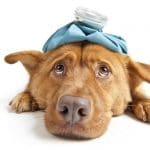 While it’s true research has shown that a roll of the dice determines most cases of cancer in dogs, there is an area where the incidence of cancer is not a function of bad luck but of something more concrete: genetics. As a follow-up to my earlier article, I thought it would be useful to look at why this is so and to also consider that, if there is a silver lining here, it is that the predisposition for developing cancer among certain breeds may provide researchers with tools to better study cancer in dogs and ultimately in people.

From a genetic standpoint, each breed of purebred dog is a closed, isolated population. Because a registered dog must have ancestors who were registered as well, no new genes enter a purebred dog population, except in extraordinary situations sanctioned by the breed registry. Every purebred dog is a relative, albeit a distant one, of the other dogs within that breed. Since most dogs are never bred but instead live out their lives as pets, the “doggie gene pool” remains relatively small. Selective breeding for each registry maintains the puppy face of the Bernese Mountain Dog, the mahogany coat color of the Hungarian Vizsla and the fluffy black fur of the Flat-Coated Retriever. However, genes that increase the risk of developing cancer in dogs also seem to have tagged along with the genes that control things like facial features, coat color and fur fluffiness. Those genes place these three breeds at the top of the list of dogs with an increased risk of developing certain types of cancer.

If there is an upside to the limited genetic diversity of purebred dogs, it is their unsurpassed ability to elucidate the genetics behind various cancers and other hereditary diseases. Using the map of the canine genome and the extensive family trees from purebred dogs, the DNA of dogs with a high risk of developing a certain kind of cancer can be compared to dogs with a low risk of developing that type of cancer. The genetic differences identified are likely areas of the canine genome where the genes for increased cancer risk lie. Once the genes are identified, tests can be developed and used to help avoid breeding individual dogs with the “bad genes.” Right now, scientists are just at the point of identifying these genes.

In part, the common ancestry of dogs has perpetuated mutations that increase the risk of or directly cause cancer. Genetic analysis of wolves and dogs shows divergence of dogs from ancestral wolves around 11,000 to 16,000 years ago. Ancient Australian and African breeds, such as the Dingo and Basenji, became distinct about 2,000 to 3,000 years ago, but most of the modern breeds of dogs, like Mastiffs and Herding dogs, are quite recent innovations in dog breeding, stemming only from Victorian times.

The Mastiff Group, which for genetic purposes here is different from the traditional Sporting, Working and Hound Groups we see breeds organized into at dog shows, is a genetically determined grouping of related dogs. This Mastiff Group includes several genetically related dog breeds that have an increased risk of cancer. For example, Boxers are prone to mast cell tumors, Bernese Mountain Dogs to histiocytic sarcoma, Golden Retrievers to lymphoma and hemangiosarcoma, and Rottweilers to osteosarcoma. The exact genetic abnormality resulting in an increased risk of cancer in these and other predisposed breeds is still under intense investigation and supported by the American Kennel Club’s (AKC) Canine Health Foundation and the Morris Animal Foundation, to name two of the major funding agencies behind this groundbreaking research.

Let’s take a look at just one popular breed to see how the genetics of cancer play out. The honey-coated Golden Retriever, who originated in the United Kingdom, was recognized by the AKC in 1925 and ranks third in popularity among AKC registered breeds.

The large number of Golden Retrievers in the United States, plus their devoted families, has resulted in an active research community surrounding this beloved breed. That’s good, because Golden Retrievers are known to have a high risk of hemangiosarcoma, a deadly tumor found in several areas of the body including the spleen, liver and heart. When scientists study the DNA of Goldens diagnosed with hemangiosarcoma and compare it to other breeds of dogs diagnosed with the same disease, the genetic abnormalities are different. Interestingly, American Golden Retrievers differ from their U.K. counterparts: Goldens from the U.K. are largely spared this dreaded disease. When studied in a laboratory, the genes of American and U.K. Goldens are significantly different, suggesting that the risk of hemangiosarcoma is related to a relatively recent genetic alteration.

Lymphoma (cancer of the lymphatic system) is another type of cancer commonly diagnosed in Golden Retrievers. The manifestation of lymphoma and hemangiosarcoma appears to be unrelated except for the frequent occurrence of both in Golden Retrievers. Now, through study of the canine genome, researchers have identified genetic alterations common to Goldens with either lymphoma or hemangiosarcoma. These alterations, or mutations, modify the regulation of the immune system’s surveillance for tumor cells, currently thought to be a common mechanism underlying the occurrence of these two dissimilar tumors in this breed.

Size and Color Play a Role With Cancer in Dogs

Though genes are important in the development of certain cancers, a single gene is unlikely to be the sole cause of cancer. For example, the genes controlling size appear to also play a role in the development of canine osteosarcoma, the most common form of bone cancer in dogs. Whippets and Greyhounds are physically very similar, with the Whippet being an apparently smaller version of the Greyhound. The similarity continues at the level of their DNA, and these two breeds are genetically very similar when their genes are compared in a laboratory. However, their risk of developing osteosarcoma, or bone cancer, is very different. This deadly tumor occurs commonly in Greyhounds but is rare in Whippets. In fact, it is uncommon in all dogs weighing less than 25 kilograms, suggesting that the genes controlling body size also play a role in the development of osteosarcoma in dogs.

Genes influencing coat color can also apparently play a role in cancer development. I have cared for a number of black Standard Poodles with multiple toes affected by nail bed (the skin at the base of the toe) squamous cell carcinoma, but never a white, brown or apricot poodle. Recently released data shows a genetic basis for my clinical observation. Standard Poodles diagnosed with nail bed squamous cell carcinoma have a variation in the number of copies of a gene known as KITLG. A similar number of light-coated Standard Poodles also have the same variation in the number of copies of the KITLG, but a simultaneous mutation in a different gene in the lighter-coated poodles apparently protects them from the cancer-promoting effects of the bad gene. Even more interesting is the finding of this same variation in the KITLG gene in Briards and Giant Schnauzers, two other black-coated breeds with an increased risk of developing nail bed squamous cell carcinoma.

What Can You Do?

When selecting a canine companion, it’s important to realize that any breed, as well as mixed-breed dogs, can and do get cancer – that’s where “bad luck” or other factors can come into play. And even if cancer isn’t listed as a health risk for a particular breed, that’s no guarantee a dog won’t get cancer.

But no matter which breed you are considering, do your homework before selecting the next addition to the family. Each recognized AKC breed has a breed club, and the Web page of the breed club typically includes information on the health issues for that breed. Talk to breeders before purchasing a puppy and ask how they are working with the breed club and the AKC to address the health concerns, including cancer, of their breed. Responsible breeders understand the health issues of their breed and support research to improve the breed. Be diligent about taking your dog for regular veterinary examinations and be aware of the early signs of cancer. Follow your veterinarian’s advice regarding all necessary screening tests and, finally, support research to improve the health of your breed through clinical trials and/or the donation of blood or tumor samples from your dog.

Even though cancer is not a topic anyone really wants to think about regarding his/her favorite furry companion, all this talk is very promising for the future of dogs. Because veterinary scientists continue to unravel the mysteries of cancer in dogs, we will soon have new and better methods of prevention, detection and treatment for these diseases.